Lectures continue in March, April, and May 2019

It is important to point out that the Myth & History series of talks is neither a programme of religious education nor is it a dissenting voice.

The talks are aimed at helping to understand Scripture and Liturgy by examining the setting in life (Sitz im Leben) in which the texts were created. Throughout this series we will be considering testament narratives within their whole Judeo–Christian background and seek to examine the paradigmatic significance the stories had for the society in which they evolved and look at their meaning, if any, for us today.

Language and thinking evolve within their contemporary socioeconomic, cultural and political contexts. From the liturgy we only get pericopaes or short excerpts of the testament texts (often spaced out over a long period of time), consequently the stories lose their original significance, deep rich insights and seem somewhat out of place in a modern secularized world. By illuminating the world behind the texts we get a fuller picture of the whole narrative, deepening our understanding and appreciation of the texts and the challenges they present.

Hebrew views of the ancient world
Hebrew words that explain ancient concepts and ideas; how their natural surroundings spoke to them

This lecture examines how Ancient Near Eastern Wisdom culture related to both the natural and the spiritual senses and enabled the Hebrews to make sense of creation and the natural world around them. It will also look at several Hebrew roots which disclose concrete and abstract meanings.

The liquid light of liturgy

Historically the distractions of grandeur and triumphalism swamped our church, and today, alas, its dominant narrative is one of divisive controversy. Our changing and challenging society is, understandably, unreceptive to the Gospel message. Faith, however, by its nature is beyond language, imbues humble silence and wordless prayer. On encountering the stained glass windows that Irish artist Harry Clarke (1889–1931) created, for churches and private patrons, we are arrested by their luminosity and detailed imagery and sense that despite dark times there are brighter days to be perceived.

John is a native of Sligo and has served in London, Kenya, and six parishes in Elphin diocese. He is editor of The Angelus and has contributed to Intercom, The Furrow, and Spirituality. He is an avid follower of St. Brigid’s Club in Kiltoom, Roscommon County teams, Sligo Rovers, and Arsenal FC.

From Moriah to Golgotha

The focus of this talk is Genesis 22, The Trial of Abraham or The Sacrifice of Isaac as it is popularly known, and how it shaped Paul’s thinking when he created the soteriology (doctrine of salvation) on Jesus’ death. The post-biblical development of the story, The Aqedah, shifts the focus from Abraham to Isaac, we will examine this and other post-biblical traditions to discern how stories evolve with the particular demands of their community.

Kevin holds a degree in Hebrew, Biblical and Theological Studies from TCD.

Unmasking myths about the Bible

The Bible as a foundational document critically shapes our understanding of faith, morality and ethics, but have we absorbed mythical understandings? Are our present-day concepts grounded on historical reality or on distortions, misunderstandings, or even sentimentality? Do we need a new reading and understanding of Scripture? This lecture unmasks assimilated myths and offers fresh readings of some pivotal bible passages with a view both to deepen our understanding of the community within which they were written and to discern meaning for us today.

A native of Roscommon, John lectures in Theology in Trinity College Dublin. He is the author of 50 books and a frequent contributor to theological journals.

'You have the devil for your father...'
The 'Jews' in St John's Gospel

‘You are from your father the devil . . .’ (John 8:44). Are we reading a robust Jewish exchange or nascent anti-Semitism? This lecture examines the fourth Gospel in the light of Jewish–Christian dialogue.

Kieran, a biblical scholar, studied philosophy and systematic theology. He has an interest in a contextual reading of the letters of St Paul with an emphasis on the popular philosophies of the times. His interests also include archaeology and the cultural background essential for reconstructing the resonances of writings from the distant past.

The epithets of God mean more than distinguishing titles, they convey the Hebrew conception of the divine nature or character of God. This lecture will explore some intruiging aspects of a number of the epithets.

Revelation: textual and traditional foundations of Judaism, Christianity and Islam

With a common link to the ancestral figure of Abraham (or Ibrahim), Judaism, Christianity and Islam are sometimes referred to as Abrahamic religions. Although there is no agreement on the role played by Abraham in these religions, each holds that God communicates through revealed scriptures. Alongside the scripts tradition plays an inevitable role. In this lecture we will look at how these religions conceive of revelation and its expression in both scripture and tradition.

Jonathan studied Near Eastern Languages, Islamic Studies, and Jewish Studies at UCD. He has lectured at the Department of Near Eastern Languages, St Patrick’s College, Maynooth; on Religious Studies at St Patrick’s College, Drumcondra; and occasionally at TCD. Currently he lectures in Jewish Studies and Islamic Studies in the School of Theology, Philosophy, and Music, at DCU. His main research is in the textual and linguistic foundations of Judaism and Islam; religion and identity formation; and authority and boundaries in religions.

The title Myth & History is used to highlight the role these disciplines played in the creation of the texts of the worlds of the Ancient Near East, where much societal uncertainty and flux arose from the constant movement of people and power, changing languages and environments in the first century AD.

The word myth comes from the Greek mythos meaning narrative or story, but in today’s terms myth equates to fictition or falsity. However, scholars have always recognized in myth an important literary form that uses symbolic language to help communicate transcendent meaning within a culture, which in turn helps to play a vital role in helping to explain the inexplicable.

Claus Westermann argued that myth, ‘is a narrative on the ultimate reality in order to answer the existential question of the meaning of this reality’.2 To explain, for instance, the absolute loneliness of human existence; not loneliness in the solitary sense, but in confronting one’s own subjective truth in the face of the impermanence of life, the loneliness of events never to be repeated.

Professor Sean Freyne argued that ‘what we need today are modern Myths that make sense in our time to deal with the pressing questions that confront all of us’.3

History comes from the Greek historia which indicates ‘knowledge acquired by investigation’. Histories are of course written at specific times and affected by existing notions of events. With the disciplines of historiography, archaeology, and literary criticism, we can explore the worlds in which testament texts were written and how their meanings have fared subsequently.

By partaking in the Myth & History lecture series you will expand your knowledge and understanding of a fascinating period in human history, and gain insights into a time and people who, not unlike ourselves, attempt to find purpose and meaning in life in a world of rapid change and expansion. 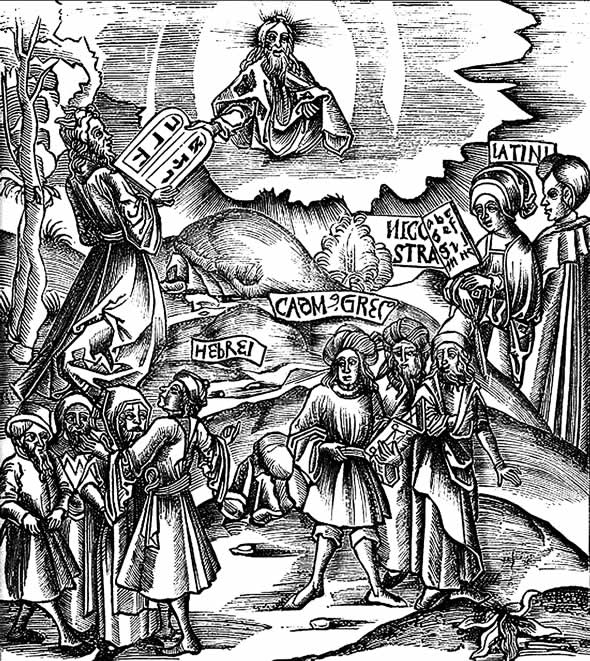 Moses receiving from God the tablets of the Law in Hebrew. Gregor Reisch, Margarita philosophica, Grüninger, Strasbourg, 1503. Woodcut after original illustration of 1508, with centre group represents Greek; on right, Learning holds a hornbook and Latin stands beside her.